In the world of Wine Makers, Wineries and Vineyards usually the ones that get the attention are the ones that have the loudest voice or largest footprint. Though sometimes the wines that are the most amazing are the ones that take the road less traveled. Such is the case with the wines of Del Real, the winery is owned by Phil and Cindy Stevens. There is a phrase in the wine industry that you hear quite often which is “this wine is nowhere” and of course that usually meant that it might only be found in a few local restaurants or maybe a wine shoppe located in a different town. Such is the case of the wines of Del Real. You can find Del Real wines in only a few places: in a temperature controlled storage room in Paso Robles California, In UnWINEd our wine shoppe located in Anchorage Alaska, and in the cellars of very persistent wine geeks and collectors. So how in the world did unWINEd end up with such a limited production wine? Well like just about every wine in our shop there is always a story and in this case it was more luck than anything else.
Derrell and I tasted through the wines at Carina Cellars on one of our scouting trips and I noticed that the lady running the tasting room was new, or at least new to us. I mentioned that I had been to the winery before about a year ago, and she said that she had only been there a few months but had known the owner for a while and had lived in the area most of her life. She introduced herself as Cindy, as we finished the tasting Derrell looked at me and said “I’m not sure if there is time to visit another winery today.” After some deliberation I agreed and the conversation shifted to dinner (as it does), so we started heading for the door and just as we were halfway out Cindy said “Hey guys if you are still in the market for more Paso wine I will check with the owner to see if I can pour you some of my wine here”. She told us that she would give us a call and let us know. The next day she called and said that she had the green light to pour her wines for us at Carina Cellars so we set a time to meet in a couple days and Derrell and I continued on with our tasting appointments. I have to say that it isn’t uncommon to find someone working at a winery that is making their own wine, but usually the quantity is so limited that it only finds its way into the homes of friends and family. If my memory serves me correctly (which it almost never does) it was mid-week when we made our way back to Carina Cellars to try Cindy’s wines, once inside their tasting room Cindy promptly asked if we wanted to try her wines only, or revisit some of the Carina Cellars wines. Never wanting to miss an opportunity to drink wine we of course said, sure we would love to try the Carina 7% Syrah again, she kind of smiled and said it isn’t really fair to compare the wines because the wines are stylistically very different and come from very different vineyards, we of course said that we understood and started with the Del Real first. First on the list was the 2007 Papa Granacha Gran Reserva (75% Grenache and 25% Syrah) aged 24 months in oak, this is a very rich mouth filling wine, nothing like what I was expecting. In short, I was blown away by the seamless blending of the two Rhone varietals, expressive, bold, unafraid, this is not a quiet wine, kind of like going to a backyard BBQ in black tie, an amazing statement. Very aromatic, blackberry, licorice, crushed herbs and roasted meats. On the palate the softness is intoxicating with very fine grained tannins. Although this is an elegant offering, it is not weak by any means and the finish is long and multi dimensional. I looked at Cindy and all I could think of to say was WOW!! She grinned and said how much do you want, we both said in unison how much can we have. 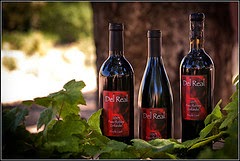 We ended up bringing back three cases, once we poured it at one of our pick-up parties, the three cases didn’t last long. So fast forward from 2012 to 2014 once again in Paso Robles looking for wine, I stopped in at Carina Cellars and found enough of the 2007 Papa Granacha Gran Reserva to offer to our wine club, since they only made 65 cases and we have bought 20 cases ourselves I don’t think we will ever see it again. I also had an opportunity to try a 2007 blend called Tinto Correoso of 75% Syrah and 25% Grenache, this beauty has an abundance of black fruit and rich tannins on the pallet and fragrances of blackcurrant , licorice and lavender. The 2007 vintage in Paso is characterized by very little rain, lots of heat and sun perfect for a rich Syrah.  The last wine that we picked up from Del Real is an artisan blend of 50% Tempranillo 37% Grenache and 13% Mourvedre called Tinto Liso. One of the sad realities in the enjoyment of great wines is when you know that one of your favorite wines is reaching its peak and once the bottle is empty replacing it is impossible. However the time between pulling the cork and seeing the bottle empty is what we live for.
I brought in as much of the Del Real wines as I could so look for them in the wine shoppe, and if you are a club member you will see some of them in the club selections for February. If you are a club member and would like some of Del Real’s wines give us a call and we will put some aside for you. If you aren’t a member yet don’t miss an opportunity like this, join today and experience Christmas every month.


P.S. Del Real uses mostly Starr Ranch fruit, and many of you know just how good that is.