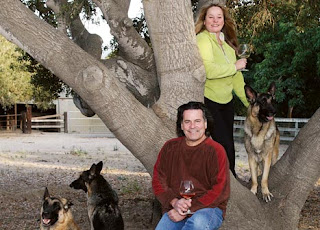 Bruno is legendary for crafting the wines at Sanford and Kris is just as famous for her amazing Pinot Noir's at Sea Smoke. When you have a husband and wife team like this as winemakers and more than half a century of wine making in Santa Barbara County the end result can only be described as epic. 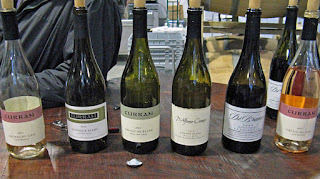 Derrell and I first stumbled (literally) across their tasting room in Los Olivos in 2011 as we were tracing the route from the movie "Sideways" and in the process locating wines for our wine shoppe. As we entered their tasting room we were meet by a couple really large German Shepherds and a gentleman who introduced himself as Bruno, my first thought was this guy looks as hung over as we are (a good chef always tastes their food often). After about an hour of tasting some of the finest Pinot and Chardonnay that we have ever had we were convinced that we had to do what ever it takes to get their wines into our shoppe.

They didn't seem too excited until they heard about our concept of featuring small artisan producers and being located in Alaska. They thought it would be kinda cool to have their wines in Alaska so for the last three years we have been very fortunate to be the exclusive location for D'Alfonso Curran wines in Alaska. Bruno and Kris produce four labels  which express different varietals and styles, most of their reds spend between 48 and 60 months on French Oak and their whites are mostly fermented in stainless. Since day 1 the wines from Kris and Bruno are among the most popular in our store - and for good reason.
Posted by UnWINEd at 12:55 PM